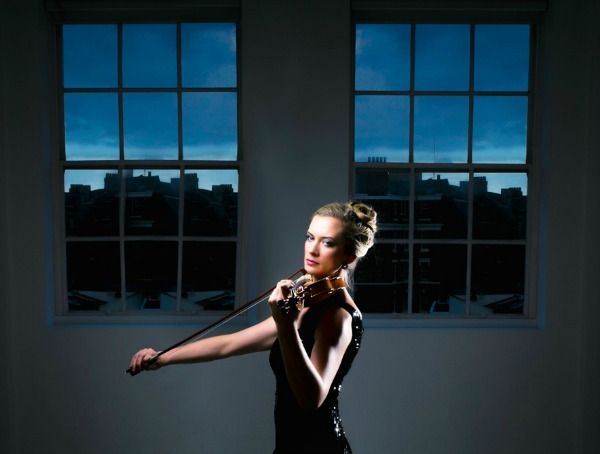 Classical music and opera have traditionally been written for opera houses and large concert halls. As much as I enjoy the grand atmosphere, sometimes I just want to relax and enjoy music for what it is – without the frills and formalities.

What’s more, classical music lovers may also want to experience an evening which incorporates other genres. How often do we come across such eclectic nights? Not often enough, but Classical Kicks – the brainchild of musician Lizzie Ball – does just that. The event was conceived in 2012 on the top-floor bar of Ronnie Scott’s jazz club. So successful was the series, that Classical Kicks has moved to the more spacious, chilled-out lounge studio of St. James Theatre near London’s Victoria station.

Throughout 2015, Ball is mixing things up. In a series of six musically-charged evenings, the glamorous ‘multi-genre’ violinist is exploring fusions between classical, jazz, world and Latin music. Last Monday’s concert (March 30) was Opera & Song – an evening jam-packed with some of the best-known opera arias and classical music snippets, with Latin soul and folk melodies harmoniously woven into the evening. Not to mention a few Portuguese greats (such as ‘Fado’ and ‘Estranha forma de vida’), and even Elton John’s ‘Your Song’.

Ball, adorned with a beaded red evening robe, addressed the audience in a calm and soothing voice, saving her frenetic energy for her violin playing. Singing the chorus to Piazzolla’s sultry ‘Libertango’ with pianist Dave Maric and percussionist Pedro Segundo, she explained how the song epitomises Classical Kicks and what she hopes to achieve in bringing music and audiences together in this intimate environment.

The evening saw more of Maric and Segundo, jamming in a free improvisation session. They also performed Maric’s own composition ‘Like Dust’ from Desert Live. Segundo gathered a collection of percussion instruments from bass drums, chimes, bongo drum…and even nuts. But loud drums were replaced by delicate percussion instruments for more serious and effervescent pieces like ‘Berceuse’ from Stravinsky’s Firebird.

Soprano Barbara Barradas gave a glamorous rendition of challenging arias from Verdi’s La Traviata, Massenet’s Manon and Bellini’s La Sonnambula. Maric, Segundo and Lizzie were in the zone accompanying her, feeling the music and playing their instruments with mirth.

Tenor Alberto Sousa, recently a starring role in Opera Danube’s Die Fledermaus, brought opera to the studio in a fun and accessible way. Dressed in a fancy evening jacket he gave a brief synopsis of each opera to the audience and took us aback with his silvery-toned voice with Nessum Dorma, as if he was still in the concert hall. Together with Barradas, the pair gave outstanding performances of the trickiest duets; there were no surtitles but their expressive faces gave the story away.

Czech pianist Lada Valesova accompanied Barradas and Sousa diligently on the piano and added a classical finesse to Dvořák’s Dumka and Bartók’s six Romanian Dances. The evening closed on a high with Sousa encouraging the audience to sing the famous, jaunty ‘Brindisi’ chorus from La Traviata. May Classical Kicks produce many more diverse evenings like these!