Lizzie Performs as Orchestra Director and Soloist for the Mikroorkéstra, Vilnus 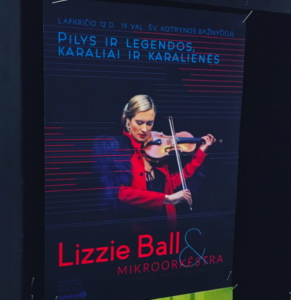 The performance was titled KINGS AND QUEENS, CASTLES AND LEGENDS and was an all English programme of Elgar, Holst and Walton, to honour the fallen for Remembrance Day, in a church that was a former prison for prisoners of war in World War Two. The evening featured Martynas Levickis as Artistic Director and Conductor, and Vilnus City Ensemble, Mikroorkéstra.